Do you know the reasons why men lose interest in women? I’m sure you’ve thought about it but you’ve not really figured it out. Your relationships tend to have the same patterns…

You meet a new man and hit it off. You both love to talk and have fun together, and things just click.

But then he stops calling as often and seems to lose interest. You’re baffled. It was going so well, and he didn’t say anything was wrong.

After talking to many men about it, I found some shocking reasons why men lose interest in women.

Let’s take a closer look at 8 little mistakes women do that make men lose interest in them.

Some of these might not seem “little” but women sometimes do them very easily, even though they seem like a big deal.

WHY MEN LOSE INTEREST IN WOMEN 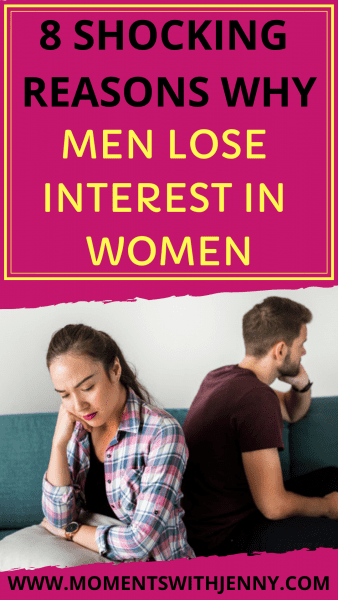 Mistake #1: Killing the thrill too quickly

A woman reading this might not have any idea what it means. A man will know instantly: they like chasing a woman, and when she starts talking about being exclusive, the chase is over.

It’s like waiting for Christmas morning, and then you open your presents, the anticipation and excitement is gone.

You see this same effect with free merchandise. If something is free, we often assume it’s not that valuable. “You get what you pay for.”

A surprising truth is that customers who overpay are often happier. That seems backwards, doesn’t it? But they feel like they’re getting a really good product.

Someone who buys a BMW, Porsche, or Bentley won’t go around complaining that they spent too much. Just the opposite!

So, let a man chase you; the fun of dating is in the chase. If things go great from the first date, that doesn’t mean that you should drop all other men you’re dating.

Keep seeing other men until one shows some commitment in starting a serious relationship with you.

Don’t let any man think that he is the only man chasing you, because then it will be a boring thing for him.

Mistake #2: Demanding too much from him

Let’s pretend that “Mimi” met a man, it went great, and after a few dates, she assumed they’d start seeing each other more and more.

She is already making mistake #1 if she goes into committed, comfortable relationship mode too early.

That will definitely end any flirting, teasing, and playfulness that men crave.

Even if you’re seeing each other, you can make a man really fall hard if you continue to let him chase you.

If you start demanding certain things from a man you just started dating, you’ll be making a grave mistake.

It might not happen that soon, but when a woman starts putting pressure on a man, he can lose interest.

We want a man to fall for us, and then we think that he’ll show his love by doing the things we want. It can turn into ordering him around, or telling him that he can’t do certain things.

The mistake might also be asking too much, too soon, before he is ready to commit on the same level. This is the reason why men pull away.

Mistake #3: Talking about your ex

In a new relationship, exes will come up. There’s a point where you probably need to talk about them, especially if they’re in your life in some form, such as a parenting agreement.

But talking about an ex early on is a big no-no, and will make a man lose interest in you. It doesn’t matter how you’re talking about the ex.

If you’re complaining, that means you’re still hurt and angry, and the ex is still on your mind.

If you’re talking about what good friends you are with your ex, that might indicate future competition and resentment for the new man.

If your new man asks about your ex, keep your answers short and straightforward. He probably wants to know how things stand, so give him an honest answer and move on.

Dwelling on your ex in any fashion can cause your new date to lose interest in you!

Mistake #4: Giving up your life

It’s so exciting to fall in love that it’s easy to focus on your new man. But if you give up your life so you’re always free, he’ll lose interest.

Don’t empty your calendar so you can give all of your time to your new man. Your lives are bound to mix, but it causes problems if you dump your life and try to integrate into his life.

He fell for you the way you were, with your own life and interests, and things to talk about.

So if you become someone waiting around to see him, he’ll lose interest. Keeping your own activities and being unavailable at times makes you more of a catch.

When he gets to see you, it’ll be more special. And you’ll be happier if you keep your life, friends, and activities, and then you won’t feel like you’re waiting for him to give you some time. 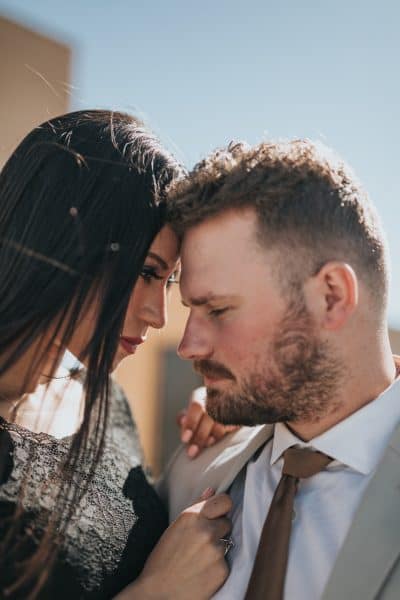 Mistake #5: Gossiping about other people

Gossiping with your girlfriends can be fun, but it can annoy a man. He probably doesn’t know who you’re talking about, and he’ll see you more negatively, not them.

Studies have shown that when we hear people gossip, the negative feeling we get is attached to the gossiper.

You’re also using the time that you could use to talk about your life, goals, dreams, new things you’re learning, or about new things going on in town. Discussing something you’re going through is different.

You can share about your life, but don’t dump on your man gossip about people you find irritating — you’ll lose his interest.

If you find his interest is flagging, discover how to easily Respark The Romance.

Sending mixed signals is another reason why men lose interest in women.

You might tell him you don’t mind if he goes out with friends…but then you’re hurt when he does and get angry with him.

Men can’t read minds. We want them to know what we really want, but you can’t test a man this way. It’s not his fault if he goes by what you say.

If you’re hurting and say you’re fine, he might not be able to read the subtle body signals or be able to connect something that happened last week.

One example is asking him, “Do you think that woman is pretty?” By asking, you’re indicating that it’s okay for him to answer honestly, but he might not realize you’re testing him.

If you say one thing but act another way, he’ll also be confused, and then not know what to do or how to act around you. And he’ll lose interest.

Mistake #7: Doing everything for him

Women show care by doing little things, but men can get annoyed if their woman is trying to do everything for them.

If he’s losing interest and you don’t know the reason why, consider how many things you try to do for him.

You’re just trying to take care of him, but he might feel like you’re controlling him. Doing too much too early can make him lose interest. Let him do some things by himself.

You can cook for him but let him wash and iron his own clothes. Being a man’s nanny is another reason why men pull away.

Mistake #8: Always being late and other little things

You probably have friends who are always late to everything. It seems that they can never plan enough time to do their makeup.

Men get annoyed by that too and lose interest, even though some women see it as a power play.

You can make men lose interest with some other seemingly innocent little things like:

Maybe you spotted something you’ve done on that list—I think we’ve all done a few of them at different times.

So, now you know 8 shocking reasons why men lose interest in women and you probably want to know how to keep a man interested.

It’s a huge turn on for men if you know your worth. He met this amazing woman and wants to date her…so don’t doubt yourself!

You have interesting ideas, cool activities, and plans. Men love to talk up their girlfriends and tell others about how smart, cool, fun, and amazing they are.

Many of the mistakes listed above happen because women get afraid that things aren’t going according to plan.

They try to read into relationships too hard and try to take action to keep things going well.

But when a man falls for you, he’s falling for you the way you are. You shouldn’t have to change or start doing things to keep him interested.

One big difference between men and woman is: Men want the woman to stay the same while the woman wants to change the man.

So, my simple advice is: continue to be yourself and enjoy the relationship, and don’t try to change the man!

Remember that he fell for you and likes you, and you deserve to enjoy your life and be yourself.

Look at the mistakes above to ensure you’re not causing him to lose interest, and then you can focus on nurturing an open, caring and committed relationship.

If you’re looking for the perfect guide on how to turn your man into the committed, attentive, romantic guy you have dreamed of, I recommend Complete Commitment.

It is a comprehensive guide designed to teach women how to make a man commit easily.