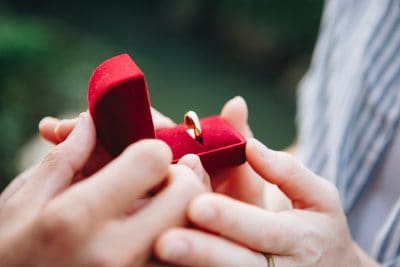 The year is coming to an end pretty fast and some single ladies aren’t so excited to be going home for the holidays. We all know how it will end…

Multiple questions are going to be thrown at you from family members concerning “the one” and “the wedding date”.

And you’re going to try to come up with lame reasons why you’re single and why you’ve not found a man who wants to put a ring on it.

Even if you’re not single, you’ll have to convince them why the man you’re with hasn’t popped the question yet.

If you’re in a relationship with a man and you’ve been coming up with excuses for his lack of desire to marry you, you have to know the real reasons why he hasn’t proposed yet.

Today, our focus is going to be on your boyfriend and the real reasons why he hasn’t proposed yet.

We’re going to dive into exactly what could be preventing him from popping the question. There are a few reasons why he hasn’t proposed yet. Let’s look at each one: 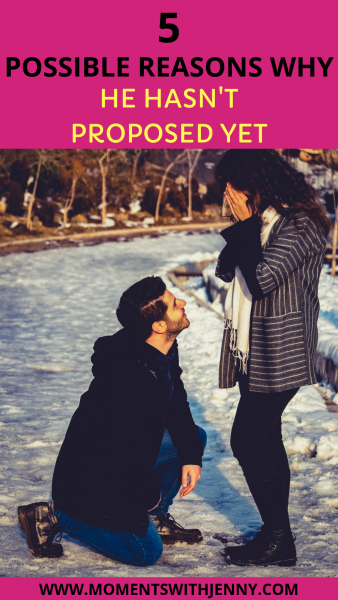 If your boyfriend hasn’t proposed to you yet, it is possibly because he is not ready to get married to you or anyone else.

He is still enjoying the freedom of being single and he doesn’t want to get attached to you in a hurry.

Men are often scared of commitment. They generally don’t commit to a relationship as easily as women do.

Obviously, their major concern is that the passion is going to fade away when they get married.

They are also considering the idea of noisy kids coming into the picture or you getting fat after childbirth. And they don’t want to deal with all that mess!

If you want your boyfriend to change his negative opinions about marriage, you have to give him positive ones.

Try to assure him that he won’t experience all those things he’s scared of when he gets married to you.

Convince him that you’ll look after yourself even after you’ve had 3 kids and you won’t gain excessive weight.

You’ll also have to convince him that your kids will be disciplined and well behaved because they will have great parents to guide them.

I’m sure if you do your best to convince him otherwise, he’ll no longer fear marriage but he’ll start seeing the benefits of getting married to you.

#2 He is not financially secure

I’m going to tell you the blunt truth― a man will not think of getting married until he is financially secure. Please write that down!

He may not wait until he is filthy rich before he settles down but he’ll want to have his life and his finances together before he considers getting married to anyone.

The number one natural instinct every real man has is the desire to provide for his loved ones. Now, if his finances are not in order or his career is a bit unstable, he knows he won’t be able to provide for you and your future kids.

So, he won’t propose to you until he gets to where he wants to be financially and career-wise.

If you want to get married faster, help him attain his biggest goals faster. Find out what’s not working for him and see how you can give him a helping hand to enable him to achieve his goals.

If you decide to allow him to figure out his problems on his own, be prepared to wait for a really long time for that ring.

Honestly, if a man loves you and thinks you are the one, he won’t hesitate to put a ring on that finger.

Even if he isn’t financially secure yet, he’ll ask you to wait for him because he sees you as his life partner. He’ll beg you to be patient with him because he can’t see a future without you in it.

So, if your boyfriend hasn’t mentioned any future plans of getting married to you someday, it is obvious you’re definitely not the one for him.

He is simply just passing time with you until he finds the one he wants to spend the rest of his life with.

If you want to find out if he has any plans of settling down with you, ask him directly! Find out if he ever plans to get married and when he might likely do it.

Ask him this one simple question and you’ll know his plans concerning you― where do you see yourself in the next 5 years?

If he says something like “I hope to be successful, rich and happily married with a kid or two”, he has plans to settle down with someone in the next 5 years.

But if he says “I should be successful, rich and happily married to you”, then you know you’re the one he wants to settle down with.

#4 Most of his friends are still single

Look at your boyfriend’s close friends― are they single or married? If most of them are still single, your boyfriend will not feel motivated to get married. Do you know why?

It’s because he is still getting great support and attention from his friends. They are still there for them when he beckons them. So, if he gets lonely, he can easily call on them for a couple of drinks or a football game night.

On the other hand, if most of his friends are married, he won’t be getting full support and attention from them as he used to because most of them have wives and kids to keep them occupied.

They have responsibilities now and they have to do right by their family. When your boyfriend gets lonely and calls on his friends, they might be busy and won’t always respond as fast as they used to.

With time, he is going to realize he is the last man standing and that’s when he will really want to start a family of his own. He’ll get his family so he won’t have to rely on his friends for support and attention all the time.

#5 He’s not under pressure

If he hasn’t proposed yet, it is likely that he is not under any pressure to get married. His family members are not pestering him to find a wife and settle down.

His parents are not insisting on getting grandchildren before they die. And his friends are not asking him why he is still single.

This is another reason why he hasn’t proposed yet! There is no one expecting him to settle down soon. If you want to give him a little pressure, you have to drop subtle clues for him to notice.

If you don’t let him know that you have plans to settle down with him soon, you’re going to remain in the girlfriend zone for as long as he wants. The ball is in your court!

I’ve given you 5 possible reasons why he hasn’t proposed yet and now it’s up to you to use them as a measurement of where you currently are in your relationship and where you will be in the next 5 years.

If you’re a woman who is either dating a man or is committed to one, and you want more love and better behavior from him.

This FREE report will show you how to get whatever behavior you want from a guy (including a marriage proposal, a second date, better intimacy, or simply curing him of annoying behaviors like acting distant and being disinterested in you).

What do you think is the major reason why he hasn’t proposed yet?

7 Clear Signs He Doesn’t Want to Marry You