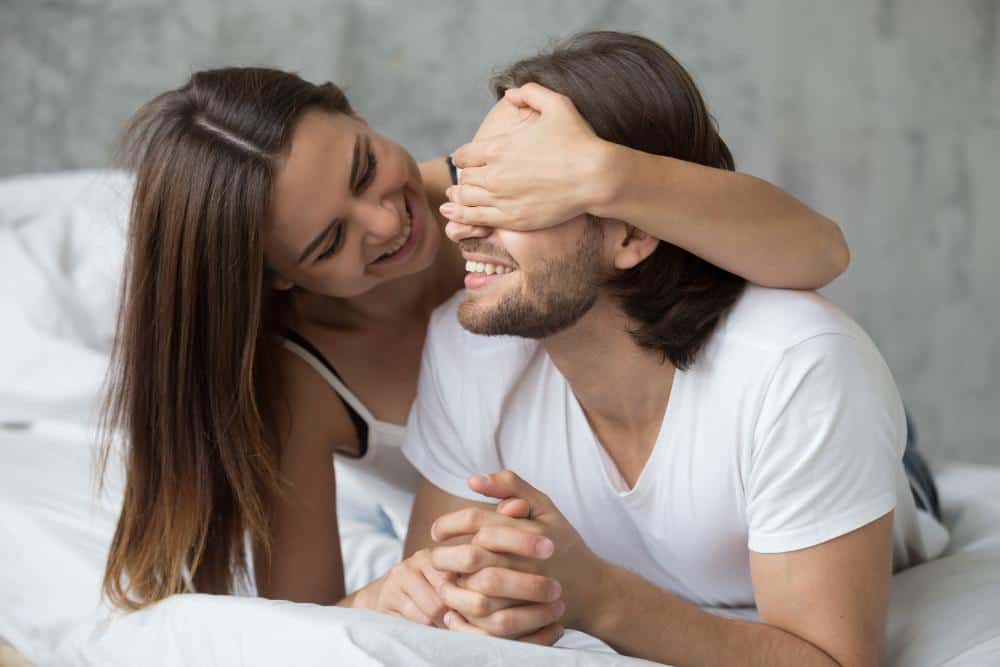 Do you know that there are many kinky things guys like in bed but won’t ask for?

A lot of men secretly desire to be sexually dominated by a woman.

But they’re afraid to explore this sexual fantasy or even talk about it openly because, in our society, men are expected to lead.

This is especially true in the bedroom. There’s a social taboo surrounding a man submitting to a woman.

When she takes control in bed, she can also make sure she’s getting maximum pleasure as she’ll be in control of her orgasm and his. It’s a win-win for both partners.

Before you begin experimenting with your man in a submissive role though, you need to first talk about your expectations and set some limits to ensure safety.

Any time you’re engaging in kinky sex, both partners should decide on a safe word that can be voiced if the sensations get too intense.

Keep reading to discover hot kinky sex ideas men love but are too afraid to try with their partners.

Wondering what to do to your man to give him more pleasure in the bedroom?

Aside from trying new sex positions and engaging in oral sex, there are lots of other freaky things you can do to make sex more fun for both of you.

If you’re looking for new ideas to add more excitement to your sexual relationship, here is a list of kinky things to do with your partner in bed:

Men love to be sexually overpowered by a woman through bondage. It’s deeply arousing for them when their women take charge in the bedroom.

A good kinky sex idea couples can start with is bondage play. Bondage enhances the sexual experience for the submissive because its psychological impact is so intense.

There are lots of bondage tools available online, but you can just run to your local hardware store to pick up some plain rope.

If you want to make kinky sex incredibly hot though, it’s best to get some basic wrist cuffs or a soft bondage rope to keep his hands bound to the bedposts.

It’s a great idea to start with the submissive partner on his back. The dominant partner can then tie his ankles and wrists together.

Or he can be tied “spread eagle” with his arms and legs spread open, and bound to either end of the bed with ankle cuffs. 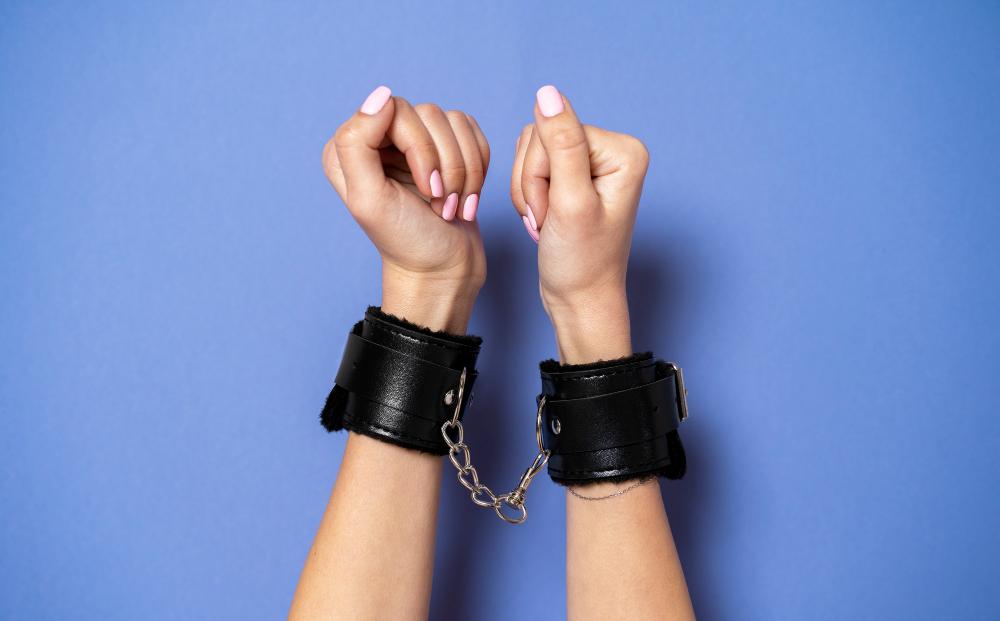 Blindfolds remove one’s sight, whereas a gag can enhance the sense that the submissive is trapped and overpowered.

As the submissive really has to trust his partner to wear a blindfold while bound, this enhances a couple’s connection.

While a man is tied up, another fun kinky idea to try is to play with his nipples.

Some men love it when their nipples are touched and pinched but they may be hesitant to explore this sexual fantasy.

A woman can sensually play with her man’s nipples by torturing them a little bit, flicking her tongue over them, or gently biting them with her teeth.

It’s best to start slow to let your man adjust to the new sensations he’ll be experiencing in the bedroom.

Nipple play with just the fingertips is best before both partners are turned on.

As arousal increases, the nipple clamps can come out so slight pain mixes in with pleasure to intensify it.

This is one of the best kinky sex moves you can try to make your man’s orgasm more intense.

A lot of people think spanking needs to be painful or done as punishment, but there’s also something called “sensual spanking.”

The butt is an erogenous zone, and spanking can be a huge turn-on, especially when it starts slowly with a good warm-up and some dirty talk.

The best way to go about this is to cup the palms when spanking the butt, measuring out the swats so they’re not all coming at once.

During intimate play, start lightly so that a guy can work up to receiving a harder spanking from his lady. 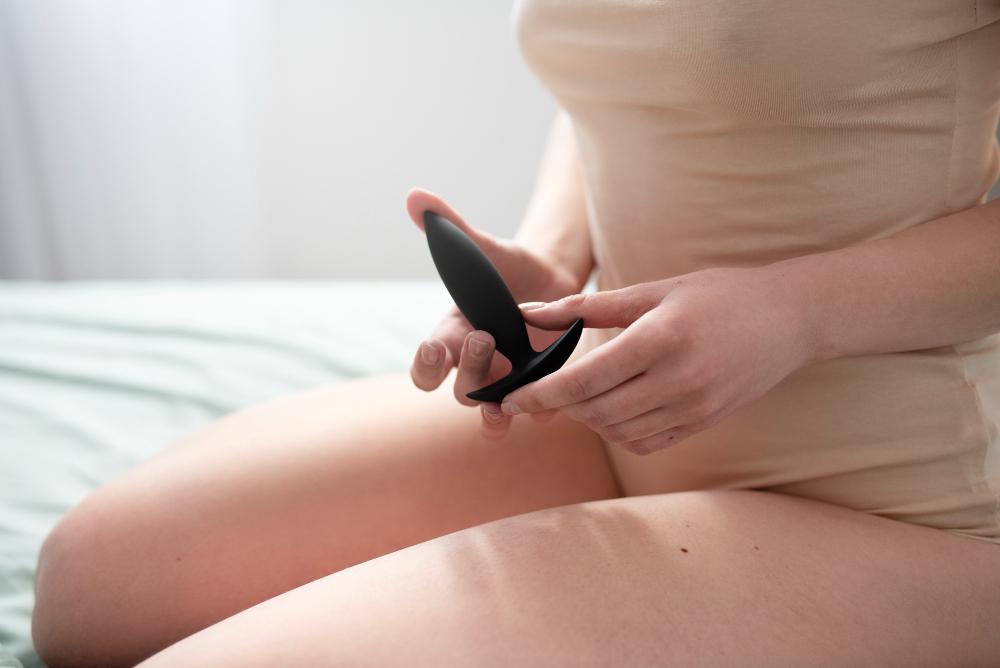 Speaking of the butt as an erogenous zone, the anus is especially sensual.

However, a lot of men are scared to go there because of the belief that liking having their anuses played with means they’re gay.

Many men won’t be honest about it, but butt play can be very exciting for a guy.

The entire butt is a sensual organ with lots of sensitive nerve endings that can be stimulated sexually.

If a man is willing to open up his mind to being anally penetrated, he’ll find that he can experience much pleasure from it.

As a beginner, it’s best to start with a finger or a slender toy to give him time to familiarize himself with his butt being fondled.

This is a sexual activity that’s really exciting since it involves using a sex toy to spice up foreplay and double your man’s pleasure.

While she’s doing that, she can reach around to stroke his penis and massage his balls to intensify his pleasure.

If you want to give your man a sensational perineum massage that will blow his mind, this ice prostate massager can be a great addition to your collection of kinky sex toys.

Playing with the testicles is also super pleasurable for a man. Light bondage on the testicles can give a man better erections and powerful orgasms.

An important part of dominating a man is making him feel like his manhood is at the mercy of a woman.

But this doesn’t have to be emasculating or painful for a guy.

Another hot kinky idea to try in bed is to tie a rope or string around the base of his testicles.

This not only creates an interesting and sensual sensation in the ball sack, but it can also enhance his erection.

While a man’s testicles are tied up, a woman can also stroke the scrotum or apply ice cubes to them during oral sex to create different sensations that are pleasurable.

One common kinky thing most men love is seeing women wear sexy lingerie in the bedroom.

This is a sexual fantasy most guys have but won’t ask for because they are afraid of being rejected or labeled a pervert.

A lot of men secretly want to see their female partners dressed up in fetish gear. They long to see their wives and girlfriends in stockings, heels, gloves, and a corset.

As a woman, it’s a great idea to dress up in sexy lingerie for your man once in a while if you want to drive him crazy.

It’s a huge turn-on for him to see how seductive you look in your role play attire.

You don’t need to worry about whether they’re novices as there’s no requirement to “play” or have sex in public at one of these events.

Sometimes just going to an event together is enough to arouse you and your partner.

Then you can both go home and explore a new kinky idea or oral sex position you discovered at the party.

Whether you’ve been together for a long time or you just met your romantic partner, trying new things like kinky sex can be an excellent way to spice up your love life and keep your relationship exciting.

From bondage play to spanking and nipple play, there are lots of kinky things guys like in bed but won’t ask for.

Turn up the heat in your relationship by bringing up bondage ideas to try for better sex.

If your man is ready to get out of his comfort zone and dive into the world of kink, go for it.

You can try any of the kinky sex ideas mentioned in this article to increase your intimacy and sexual satisfaction in the bedroom.

To maintain personal hygiene and avoid getting infections, spritz this Lovehoney fresh toy cleaner over your adult toys before and after each use.

13 Powerful Tips On How To Satisfy A Man In Bed

23 Freaky Tips To Spice Up Your Sex Life