Do you know the signs you are dating the wrong guy or the right guy? It is so easy to hear people say “I’m in a relationship” even when it is an abusive or unhealthy one.

I guess some people just like the status of being in a relationship even if they are with the wrong person; they prefer being unhappy in a bad relationship to being single and happy.

Some ladies derive joy in telling their friends that they have “a new guy” even when he may not be the right choice for them. They enjoy being abused and beaten than being free and happy.

Their only fear, of course, is that they may never find another man who would take care of them.

I find that outrageous and pathetic. It simply shows a lack of confidence and very low self-esteem.

Everyone feels insecure occasionally but the ability to believe and trust in one’s self instead of worrying over everything is all that matters.

Being with the wrong guy can be compared to buying an “unfitting dress” that you can never change.

The best thing to do with that dress is simply giving it out to someone it may likely fit or just throwing it away.

You might ask “Why don’t I just adjust the dress a bit? Maybe sew some rough edges together and patch the torn areas.” Remember we are not talking about a dress here!

We are talking about dating the wrong guy. You can’t just change people especially if they don’t want to change.

It would be wise to give out the dress or throw it away entirely in the garbage where it belongs.

When you do that, you will discover that your wardrobe will have an empty space for a beautiful new dress to occupy.

If your TV is bad and you try repairing it several times but it keeps getting worse and you’re obviously not happy about it, what do you do with it?

You throw it away or give it to someone else who needs it. You don’t need any trash in your life!

So, the inevitable question now is, how do you know you’re dating the wrong guy? Just watch out for the following signs:

10 SIGNS YOU ARE DATING THE WRONG GUY 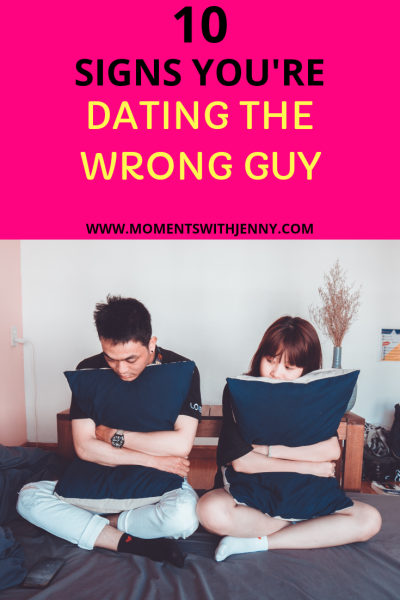 1. HE HAS ANOTHER GIRLFRIEND

Going into a relationship with someone who has a girlfriend is clearly asking for a heartbreak.

If he is serious about you, he would break off all forms of contact with the present girl so that he can be with you.

But when he is reluctant to let her go, chances are that he is still very much in love with her and only wants you as a side chick.

Initially, you may find it exciting but when he leaves you without even a glance, your heart will be shattered.

My advice is to let him go if he is already taken and if he is truly yours, he’ll come back. There is no need wasting your time over someone who will never love.

2. YOU HAVE NOTHING IN COMMON

Many people say “opposites attract” but is it really true? Does it apply to everyone?

If you and your partner can’t do anything together because you have nothing in common, what’s the essence of entering the relationship in the first place?

It is normal for a couple to have diverse beliefs about things and different hobbies but companionship comes when one or both of you can compromise.

Even when you don’t like football, you join your partner to watch it because you know it makes him happy and he can always return the favor by watching “gossip girl” with you.

But, if no one wants to compromise for the other in a relationship, what’s the essence of being together? It’s a sure waste of time.

3. HE KEEPS TELLING YOU HE IS SCARED OF COMMITMENT

Now, that’s one comment that will make me dump a guy faster than a hot cup of coffee. A guy who truly loves you won’t hesitate to ask you to remain by his side.

Even when he isn’t financially secure, he’ll ask you to wait for him because he can’t imagine life without you.

Beware when your beloved boyfriend starts telling you how afraid he is of commitment.

It could only mean one thing; he is looking for flimsy excuses not to be committed to you or he is already committed to someone else.

4. HE ONLY WANTS TO SLEEP WITH YOU

A guy who wouldn’t walk the streets with you or show you off to his friends but will hurriedly jump under the sheets with you is not worthy of you.

You’re only an entertainment center for him. When you visit him and the first thing he does is to undress you, just flee.

He is only interested in getting intimate with you. He’ll dump you the moment he finds something more exciting under a skirt.

If you’re in a relationship with someone who doesn’t create time for other important things except getting laid, he is definitely the wrong guy for you. 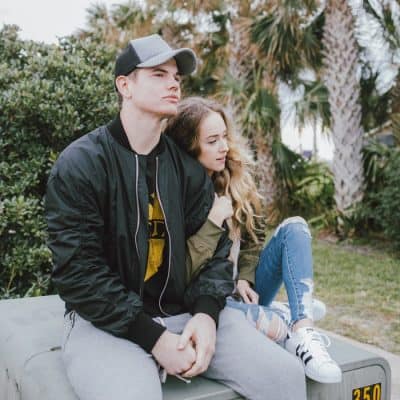 5. YOUR COMMUNICATION LEVEL IS ZERO

I always say that communication is essential in every relationship. It helps you deal with issues amicably.

If you and your boyfriend never sit down together to talk and laugh about issues, then the relationship is already doomed because each person will expect the other to become a mind-reader.

This often leads to resentment, big fights and eventually separation.

When a man cares about a woman, he makes out time to be with her. No matter how busy he is, he would call or text her whenever he misses her.

He would always remember her birthday or any other important occasion they plan together.

If he forgets to call or text you occasionally, just give him some time.

But when it becomes a tradition for him to claim to be so busy that he rarely has time for you, chances are that you’re not at the top of his priority list.

In fact, it could mean that he doesn’t take you seriously.

7. HE HITS YOU REPEATEDLY

Any man who hits a woman for whatever reason is not worthy of that woman.

Yes, women could be troublesome but the ability of a man to handle a difficult woman maturely actually makes him a responsible man.

If he hits you for whatever reason, please get out of his life! He doesn’t deserve you!

He may likely come back begging and when you accept him back, he’ll just resume the punching. Save yourself the trauma and dump him.

If you die tomorrow due to the beatings you receive from him, he’ll likely date and even marry someone else. We all deserve love not punches!

8. HE DOESN’T MAKE YOU FEEL HAPPY

If he doesn’t make you happy or make you smile, what are you still doing with him?

Maybe he showers you with lots of money and expensive gifts but amidst all that you still find yourself unhappy.

I know your happiness shouldn’t depend on a man. But if being with him doesn’t make you happy in any way, please find someone else who will or show yourself some love.

Responsible men always care about the happiness of their women.

9. HE OBVIOUSLY HAS NO FUTURE:

Some girls find themselves falling head over heels in love with bad guys. I don’t know what makes them so special that girls fight to have them.

Some of these girls end up with die-hard criminals and drunkards in the name of being in a relationship and feeling secure.

Just remember that once a thief, always a thief. Don’t even think of changing him because you might never achieve that; the easier route will be to run for your life.

10. HE FLIRTS OPENLY WITH OTHER GIRLS

A man who respects and cherishes his woman will never flirt openly and knowingly with another girl especially in her presence.

He will try his best to be committed and loyal to his girl because he has everything he needs in her.

If your partner frequently checks out other women in your presence, it is obvious that he doesn’t care about your feelings and he doesn’t see you as a girl he can be committed to.

He is too busy searching for other roses while you’re there doing everything to impress him. Show him you deserve better by dumping him.

Just be smart, follow your instincts and leave that wrong guy for good; he doesn’t deserve you.

If you don’t let old things pass away, new things may never come because their place is obviously occupied with junk.

Believe you will find someone way better than him; someone who is undeniably right for you. Believe that you deserve to be loved.

Have you noticed any signs you are dating the wrong guy?

10 CRYSTAL CLEAR SIGNS YOU ARE DATING THE RIGHT GUY

TOP 10 DATING RED FLAGS TO LOOK OUT FOR